This following letter from Smitty will show how much the G.I.’s of WWII and those of today have in common.  Human nature doesn’t seem to change very much in 68 years. 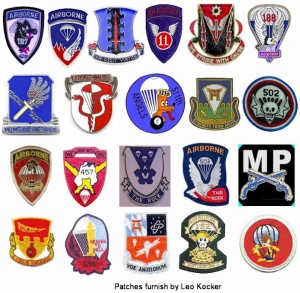 Dear Mom,  Java at 2100 is nothing more or less than a good old-fashioned gabfest or the same as women folk back home call a “Koffee Klotch.”

There are a few differences though that need a little explaining.  At home, the girls gather and talk, generally about the one who isn’t present; including in this conversation, her husband and his family, also hers and then down the line to her most distant relatives.  Also, they will gab for hours about the gossip of the neighborhood and of course add a little more to it.  At times, arguments amongst themselves will ensue and that ends the present meeting and the next few to come.

With us there are a few differences and variations, such as: we don’t care whether the person being talked about is present or not; although his absence is preferred and appreciated.  Of course we have our little gossip circles, but they mostly run toward the rumor side and therefore no one puts much stock in them.  Invariably we always talk of home, such as what we did before the President greeted us, also what we intend to do when we get back.  This home talk most always leads into a lively debate as to whose state, city or county is the best.  Arguing that topic is just like arguing religion; no one is ever impressed or convinced.

The officers are always good for a good 20 to 30 minute razing, with no one pulling their punches.  At times though you must be careful, as there might be someone present who is bucking like the devil and the talk will go back.  Never is there a good word said in the officers’ defense and I doubt if there ever will be.

Another colorful period is spent when someone brings up non-coms.  What is said at this time is unprintable.  Surprise to say that if I was visited by the seven plagues, I wouldn’t be as bad off as the non-coms, if even half the things wished upon him should ever befall him.  I sometimes wonder if ever in their own conceited way they know just how the private feels toward them.

At home, the girls are all gathered around strictly  talking, but here again we vary.  Some may be playing cards with every now and then some player adding his say, much to the consternation and anguish of the others.  Over in another corner are the die-hards who always listen for rumors and continue on talking about the latest one long after the others have dropped it.

All this time the water is being boiled outside in a large five gallon can.  Every now and then, someone will go out to see if it is time to add the coffee.  When once the coffee is added, there comes over the tent a lull and then everyone shuffles out to get his cup, which he will dip into the can of coffee before coming back in.  Conversation for a while is a combination of talk, loud sips and the blowing of the hot Java.  We manage also to provide milk and sugar and at times, crackers.  The last is generally present only around paydays.

I don’t know whether it is the effects of the hot coffee upon the vocal chords or not, but always right after the coffee, some would-be Crosby or Sinatra starts singing some old favorite and that is when music conquers over all.  They say music has its charms, but after listening to it here — I have my doubts.

Some nights the conversations are really good and so is the coffee, on those occasions, talking lasts after taps has blown and then you are sure to hear the mournful wail of the company charge of quarters meekly saying, “Aw fellas, put out the lights.”  Never has it happened that the request was heeded and I doubt if it ever will be.  It isn’t long after though that the first sergeant comes barging in bellowing, “Get those blankety-blank lights out and get the H–l to bed!”  Lights immediately go out and good-nights can be heard throughout the company area as Koffee Klotches all over break up.

Peace and quiet prevails until all one can hear is the not too soft patter of feet heading out to the place where, at some time or another, we all must frequent.  Bits of conversation can be heard drifting through the night, but generally isn’t worth listening to, as it is only the rumor mongers at work again in their office.

Before I close this chapter, allow me to say that the evening coffee, sugar and milk are all donated cheerfully by the fellow most unfortunate enough to have had K.P. the day before.

Having nothing more to gab about and also having to pay a visit down to the end of the company street, I’ll close before I have to make a run for it.

Gabbingly yours,  Everett  (The Donator of This Evening’s Coffee) 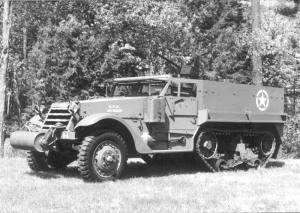 Thought I would throw in this photo of a half-track, a vehicle that Smitty felt had the capacity to go anywhere.