“They put us out in the middle of nowhere.” Sheriff Toby Madrid had his hands wrapped around a cup of black coffee, his feet up on the desk. The casual laid back attitude belied the tension in his jaw. He also wasn’t looking at JR or me as he spoke, but at the wall. It was almost that if he looked at us, he’d never finish talking about what he had to say.

“They told us we were there to be part of an atomic bomb test.” 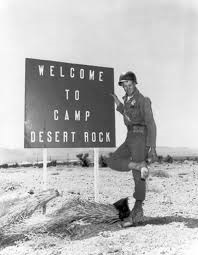 The test the Sheriff was talking about was part of what we know today as the Desert Rock Exercises.  My research seems to single him out for what was called Desert Rock IV, or a series of tests called Operation Tumbler-Snapper.

From 1951 to 1957, at the Nevada Proving Grounds, a small camp called Camp Desert Rock was built. Its job was…