← Missed photos – YTD
What would become known as: The Bomb →

Truman and the Potsdam Conference 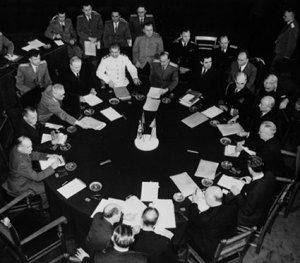 “Operation Iceberg,” the invasion of Okinawa began on 1 April 1945 and would basically end 22 June. Many are unaware that small skirmishes continued even after the 11th Airborne Division landed on that island. But … as we enter into July, others matters begin to develop.

Harry S. Truman did not have the outstanding record that most people look for in a president. He had poor eyesight and was unable to complete a 4-year college. Later, he failed as the owner/operator of a small mining and oil business, as a farmer and then as a haberdasher. (In my opinion, that only left politics as an option.) HST was elected to the Senate with the assistance of the corrupt Thomas J. Pendergast and proved to be an unimportant legislator. His only military achievement was in successfully tightening up the discipline of the rag-tag outfit he was given. He was chosen as the Vice-Presidential candidate because southern democrats liked him and FDR needed those votes. (I’m afraid these facts were located during research, they are not my own thoughts – unless specified.)

The 7 points of the Potsdam Proclamation

This was the man sent to Germany, sailing on the “Augusta” with Secretary of State, James Byrnes and Admiral Leahy to attend the Potsdam Conference to begin on 17 July 1945. The primary agenda for the massive meeting dealt with the revision of the German-Soviet-Polish borders and the expulsion of several million Germans from the disputed territories. The code name for this conference was “Terminal,” with Stalin, Churchill and Truman representing the three major powers.

16 July was significant in that the Atomic bomb was successfully tested, exploding the equivalent of 20,000 tons of TNT and a blast point of 750 degrees F. Oppenheimer would then prepare the test results for his report to Henry Stimson in Potsdam. Truman confided the news to Churchill and the two rulers instantly decided that at least two bobs would be dropped on Japan. This decision was made despite the arguments of Adm.Leahy, General “Hap” Arnold and Gen. Dwight Eisenhower who strongly spoke against it’s use, calling it completely unnecessary. Many of the scientists that worked on the Manhattan Project felt that such a dramatic scientific discovery should not be used. The petition, “…the liberated forces of nature for the purpose of destruction … open the door to an era of devastation …,” was signed by 57 scientists. They had the foresight to visualize the nuclear problems that we face today, but their qualms went unheeded.

The Potsdam Proclamation demanded the unconditional surrender of Japan, but did not make mention of two clearly important issues – (1) that the atomic bomb was is existence and (2) whether or not the Emperor would retain his seat in the palace. Both of these provisions would have clarified the true situation for the Japanese Army. Many, on-site at Potsdam, believe that the Japanese were purposely and maliciously misguided.

26 July, the same day that Clement Attlee defeated Winston Churchill in the election for Prime Minister, the Potsdam Declaration was sent to the enemy. The exact wording of this document made it unthinkable for Japan to accept. Once again, the lack of understanding for a foreign culture would hinder the road to peace.

page of the Potsdam Declaration

Keep in mind, while still at sea on the ‘Augusta,’ Byrnes had received a message from Sweden stating that Japanese Major Gen. Makoto Onodera, having authorization from the Emperor, wished to enter into peace negotiations. The only stipulation being that the Emperor remain in power.

By this time, Prince Konoye had spent two years laboring to uncover a route to peace. The prince had had the correct procedure all along, but mistakenly had chosen the Soviet Union as the go-between. Stalin had his own agenda in mind for the Japanese and their territories and therefore he deceitfully strung the envoys along with various delaying tactics. OSS Allen Dulles, who assisted in negotiations when Italy fell, was working on the same premise in Switzerland. Nevertheless, as spring turned to summer, militarists in Japan continued to plan for Operation Decision (Ketsu-Go) and ignored their government’s attempts for peace. Disregarding Japan’s concern for their Emperor, the Potsdam Declaration was considered by Premier Suzuki and the military to be a re-hashing of the Cairo Declaration which deemed it to be marked as “mokusatsu” (‘ignore entirely’ or ‘regard as unworthy of notice’)

In regards to the A-bomb, Secretary of War, Stimson and his assistant, John McCloy, told Truman, “We should all have our heads examined if we don’t try to find a political solution.” Truman laughed.

So many manuevers, conversations and secrets go on behind the main headlines, but here is one story I hope you take the time to click and read. This obituary was in “The Week” news-magazine and I could not resist including it here. Could any of us do this job today?

Note of interest – 17 July 1945, kamikaze units were no longer voluntary.

← Missed photos – YTD
What would become known as: The Bomb →