← Jump on Aparri
gpcox – When Making a Car Was Illegal → 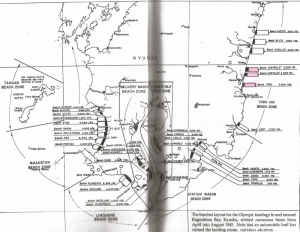 The original idea for the invasion of Japan was approved in July 1944 and received constant, precise detailing up until the actual signing of the surrender. Operation Downfall was broken into two separate plans, Operation Olympic which would be followed by Operation Coronet.

With all the devastation already incurred on Japan, a forceful occupation would still be very costly. The Japanese Army controlled the government and their wish was a fight down to the last man, woman and child. Later on, members of that army stated that it would have been an all out suicide effort of every person in Japan to fight to the death.

Operation Olympic, which included 750,000 troops were to land on Southern Kyushi 1 November 1945. In the first wave, Army, Navy and Marine personnel – 436,486; the second wave to hold 356,902. (How they managed to be so specific is way over my head.) The air support would total 22,160. The D-Day Operation Overlord would have paled in comparison and this led the Joint Chiefs of Staff to agree that this rendered Russia’s involvement unnecessary.

MacArthur’s estimations of casualties and wounded that he sent to Washington were judged by the invasion of Luzon. Gen. “Vinegar Joe” Stilwell sent his report based on the Okinawa battles; these were much higher.

While Europe’s “Overlord” had beach codes such as: Omaha, Utah, Sword and Gold, “Olympic” had a variety of automobiles for the beaches that were then grouped by type. Gen. Krueger’s Sixth Army, that included the 11th Airborne Division, was scheduled to land at Miyazaki, the eastern prefecture of Kyushu, the third largest island of Japan. The forty-mile long shallow beach areas were coded as ‘Chevrolet’, ‘Chrysler’ and ‘Cord.’ (Highlighted sections on map above.) At the time, there were approximately 126,000 Japanese troops in that zone. Even after both atomic bombs were dropped, the Sixth Army was expected to have 15,000 casualties.

MacArthur had wanted to keep Gen. Eichelberger close to him and direct the operations since his record with the 11th A/B on Luzon was so efficient. As had been mentioned previously, the five-star general felt that Gen. Krueger had led a rather undistinguished campaign thus far. 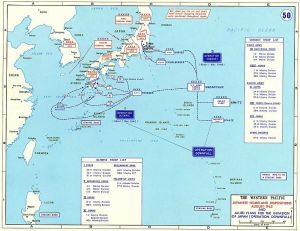 The itemized tons of materiel listed in the plans grew beyond comprehension. P-51 Mustang fighters were shipped to Guam still in their crates. Stocking grew on Tinian, Saipan, Samar, Luzon, Hawaii, the Marianas, the Carolines and the west coast of the U.S. (just to name a few). The logistics could only be explained by experts.

In a memo from the Undersecretary of the Navy, a project named “Dagwood” was mentioned, but I am unable to locate any details. MacArthur sent out a deceptive message (with slip-shot secrecy) to be intercepted by the Japanese called “Pastel Two.” This showed a detailed “plan” about Allied landings on the China coast. The Panama Canal had a steady stream of ships loaded with men, equipment and supplies. Seven more atomic bombs were on order for “Olympic” British, Canadian and Australian divisions were to be re-equipped with American weapons and logistical support to standardize the entire operation. The Allied planners felt they would ultimately involve 5 million men. (Operation Overlord in Europe totaled 150,000 men and 1,500 tanks.) They expected opposition from 5,000 kamikazes, which proved later to be correct. The main objective for “Olympic” would be to secure Kagoshima Wan; a great landlocked bay for which men and supplies would flow through for the post-invasion buildup.

Operation Coronet would follow Olympic on 1 March 1946 and would be a more massive invasion. The main objective then would be Tokyo Bay on Honshu.

The Naval plans were also far too complex for me to completely list here, but to give you an idea – Halsey’s Third Fleet was assigned eastern Honshu and the Fifth Fleet would take western Honshu, Kyushu and Shikoku. The Seventh Fleet would be at Korea (south of the 38th parallel) and Admiral Fletcher’s North Pacific Force would cover Hokkaido.

After the fall of Saipan, Japan knew they were forced to strengthen their homeland defenses. Yet this progress was moving slowly; labor was scarce, with the lack of fuel their mobilization was slow, production, food and weapons were decreasing rapidly. The country was becoming very tired of war. Covering the Japanese islands were four ground armies of eight divisions and 14 cadre divisions; plus three air defense divisions. Immense manpower groups were expected to bring this to 56 divisions, 38 brigades, somewhere in the vicinity of 2 million new men. War materiel was to be brought in from Manchuria. The Japanese plan of defense was called “Ketsu-Go.”

I realize the map is difficult to view even after you click on it, but try to see the black squares which represent Japanese defenses with artillery.

For Paul Putnam for his father Robert, a veteran of the 11th Airborne

Guest post #4 at Greatest Generations will be posted next Tuesday, please stop in and read about the vehicles, civilian and military during the WWII era. Let Judy and I know what think or even add some more info for us. Thank you.

← Jump on Aparri
gpcox – When Making a Car Was Illegal →