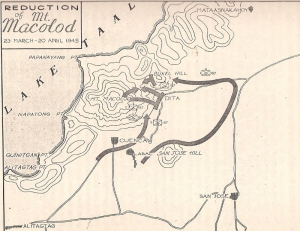 2 April, the 187th attacked and cleared the area to the base of the mountain, but were unable to hold the ridges. One pocket of the enemy were dug in between the two southern ridges and small Japanese patrols were strewn along the highway near Talisay, indicating to Colonel Pearson that the enemy held that sector. His feelings were confirmed when his CP was hit with Japanese 155mm artillery shells. The quick reactions of the 674th Glider Field Artillery Battalion to counterattack saved the 2d 187th.

8 April, General MacArthur released a communiqué to state that because of the 11th Airborne’s actions, “…all organized enemy resistance in the southern part of the island was destroyed and liberation was at hand.” As usual, his assessment of the situation was premature, but it was just the type of enthusiasm that endeared him to the Filipino people. His optimism gave them the strength to persevere through some gruesome events; such as when the 2d moved through Sulac, the men found one hundred Filipinos brutally massacred and discarded in a ravine.

7-17 April, the battles around Macolod continued making this one of the bloodiest battles the 187th ever fought. The regiment received massive downpours of artillery, but when the troopers discovered that the guns were all grouped together, they were eradicated. The 187th was exhausted by this point and diminished even further by casualties and wounded, but rest was not on the schedule.

Guess what! Judy Guion invited me back to write another guest post on her blog, greatestgenerationlessons.wordpress.com. I hope you will all stop in next Tuesday, February 12th and tell us how I did with the Technical units.