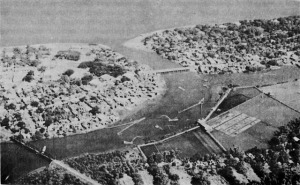 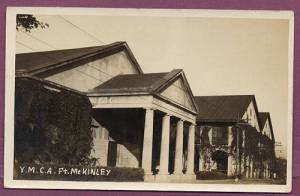 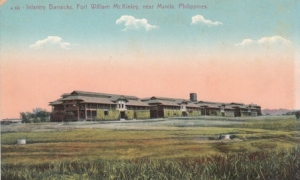 The plan on 15 February for the 2d battalion of the 187th and the 188th was plain and simple: push forward and keep going – then meet up with the 511th at the Carabao Gate and still keep pushing. First they cleared the 6 foot high railroad tracks, then a dry riverbed and started to go up the barren rise. All this time there was no enemy resistance and not one sound whatsoever. The Leyte veterans knew something was wrong, they could feel their skin crawl and suddenly they discovered the ruse.

The Japanese soldiers and their machine guns had been buried in the riverbed and were now behind the G.I.s. A hoard of the enemy came at them screaming despite the gunfire, BARs (browning Automatic Rifles) and hand weapons that killed and wounded them as they charged. But, they continued to come in waves and reached the 1st platoon. The second platoon caught up to them and destroyed some of the Japanese machine guns. In the total chaos, the enemy ran to their pillboxes to regroup. When two more companies arrived on the scene, the Japanese outfit was trapped. A strange explosion underground knocked some of the troopers to the ground. The enemy, rather than surrender, had blown their hideout thinking they would kill the G.I.s above them, but it was not a sufficient charge to accomplish this. They had only murdered themselves.

The 674th and 675th Glider Field Artillery Battalions had been firing endlessly with the aid of the cooks, clerk, drivers and gun men and took shifts. Banzai attacks were common on these positions, so perimeters had to be kept firm. Swing’s plan was to keep squeezing the enemy into a tight group and then block their escape routes.

On 15 February, Swing had his new Pierson Task Force (the 1st of the 187th reg., 3d of the 19th Infantry, A Company of the 44th Tank Battalion, a company from the 127th Engineers and the 221st Medical Company) run even with the shore of Laguna de Bay. The 2d of the 187th, the 188th and the 511th formed another line. The lawns and sidewalks of Ft. McKinley were lined with large depth charges. The detonators led back to places of observation; barbed-wire traps and mines littered the entire eastern side.

16 February, large explosions began to occur and destroyed one side of an eastern hill as the enemy tried to destroy their own ammunition dumps. On 17 Feb., the 11th Airborne main attack began and encountered ever increasing resistance, including more banzai attacks. The trooper casualties were much lighter than the brass had expected with all the G.I.s knew they were going to confront at the enemy stronghold.

The Headquarters Company was credited with the taking of Fort McKinley which meant that the division had now seized two-thirds of the Genko Line. During this time of heavy fighting, Generals Swing and Eichelberger were also making plans for a simultaneous attack on Corregidor, “The Rock” that sat right in the middle of Manila Bay. 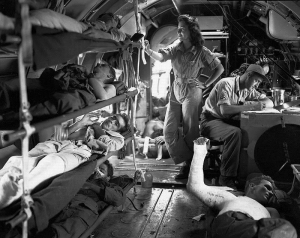 Everett Smith served with the Headquarters Company, 187th Regiment, 11th A/B Division during WWII. This site is in tribute to my father, "Smitty." GPCox is a member of the 11th Airborne Association. Member # 4511 and extremely proud of that fact!
View all posts by GP Cox »