By 1300 hours on 3 February 1945, General Swing had most of his division back together and he made the Manila Hotel Annex his CP (Command Post). The beautiful hotel seen in the picture above (10 months later) had been looted and ransacked long before the Americans got there, but it would suit their purposes. Frank Smith, a reporter for the Chicago Times reported that Gen. Eichelberger stated at the Annex, “The 11th Airborne Division is the fightingest goddamn troops I ever saw.”

Highway 17 would now begin to turn into a two lane concrete road. This seemed like a good sign for beating Gen. Krueger to Manila, but the 11th was short on trucks and the fuel to move them. Gasoline arrived on the 4th, delivered by ten C-47s. Forward scouts reported that the road was fairly safe as far as Imus and the 511th regiment moved out.

The 188th and the 1st of the 187th finished clearing out Shorty Ridge of the enemy and then they too moved toward Manila. It was here that Swing altered the missions of some of his units. General Hildebrand of the 187th was told to secure the main supply route (MSR) and was given control of the thousands of guerrillas of Batangas and Cavite provinces. Controlling and organizing the guerrillas was a difficult operation as they would remain loyal to whoever ran what section of which province. Coordinating their missions and tracking them and getting them supplies was extremely tedious in comparison to an Army unit. The guerrilla reports were not always reliable either. Eichelberger, in one, was told that Manila was burning to the ground. The general looked out his window and could see for himself that there was one small trail of smoke. Active patrols of the 187th, though shorthanded, drove the Japanese farther back into the mountains as they continued to move to an area south of the capital city.

On the 4th, the calvary, under Brig. Gen. Chase, arrived to release the 510 prisoners of Santo Tomas and Bilibid prison. Also on this date, General MacArthur released a communique that Manila was free and in our hands, BUT as was his nature, he was a bit hasty in his reports. The Sixth Army coming down from the north and the Eighth Army (which was actually the 11th A/B) approaching from the south, had much work to do ahead of them. The 187th set their sights on the airfields and the areas where the Japanese manned the AA (anti-aircraft – also known as ack-ack) guns. 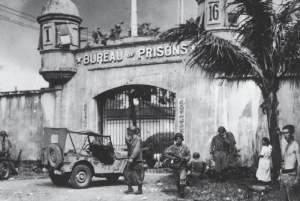 the old Bilibid Prison 1945 The soldier looking at the camera is Sgt. Joseph A. Butkiewicz, recognized by his grandson, Rylie.