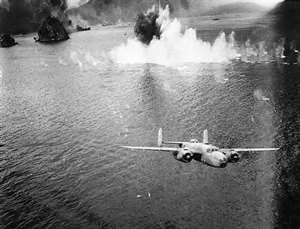 There were numerous other bombers, such as: the Marauder, Dominator, Liberator, B-34, etc., many of which went through different variations.
But, since we are giving credit where credit is due – there were also numerous other planes involved in assisting the ground forces. You had the fighters, such as the P-40 which became known as the plane of the “Flying Tigers.” On February 1, 1945, the Corsair made their first regular operational flight from the US Navy aircraft carriers. It had a kill ratio of 11:1 with it’s six machine guns and capability of soaring 417 mph. The Corsair would become the best of the carrier planes. 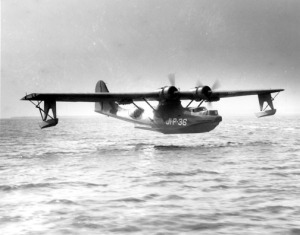 And the, you had Dive Bombers, Torpedo bombers, attack planes, Reconnaissance, Cargo and Transport (like the C-46 Commando and C-47 Skytrain), Liason planes, Observation, Seaplanes, and Flying boats – eg. the PBY Catalina, some of which are still in use today. This ship was useful both as a rescue and a bomber.

This post is to give the reader an idea of the constant activity going on in any one area. The Allied forces and each branch worked separately, but simultaneously to accomplish one goal. Perhaps that is one reason why I find the WWII era so interesting. If anyone out there would like to further research this topic, I recommend daveswarbirds.com/usplanes/american.htm as an excellent starting point.